You all know me by now. I will do a review only after I have read the book. When the author of this book invited me to review her book, I blithely wrote back my usual style. I need to know what I am reviewing. Right? I got the book , then saw the number of pages and I desperately wondered I didn’t just allow myself to be guided by the first offer and stay close to what amazon.com had to say. But I knew one review can be different from the other and I had no choice. When I started reading however, I became very alarmed and uncomfortable. I was worried, angry at different times and unfortunately I took the story into my dreams as I became a captive of Memuna Barnes.
I was saddened at the waste of adolescent dreams, the eagerness of young souls trampled underneath by our base emotions. The innocence of Memuna and her fellow victims, hope killed by the bullet into the brains of Fuck-care. Those names , how-are-you, Pustine, C.O Base and a host of others. It was painful to read how Memuna overcame her first horror at brutality to her resigned acceptance of it. She never came to terms with it and she mirrored to us how the older generation had failed them.

Survived the Journey is the journey of an innocent, fresh- faced, pert and saucy teenage girl, forced to grow up fast and eventually traumatized by the sheer cussedness of humanity where dreams die first.. She could easily have used that as the title of her book except for this detail, Memuna Barnes is a first rate survivor, who had the grace to be stubborn, a determination to hang on to her virginity, that determined her dreams.
Memuna survived the darkened dawn so she could take her place in the sun. Read her story and be inspired. I read and then I had these questions.
Congratulations on your book but we will love you to answer a few questions 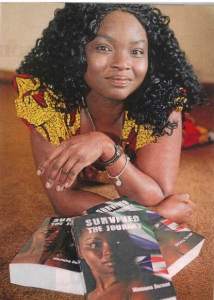 1. Please tell us a bit about yourself
A) I am Memuna Barnes in my 30s, one of nine children. I was born in Liberia to a Sierra Leonean father and a Liberian mother. I came to New Zealand in 2000 as part of the United Nations Refugee Resettlement Program with my father and younger sister Mamawa.
2. You started your story straight away about the capture and your family remained most times in the shadows. Tell us a bit more about your parents.
A) Growing up both of my parents were in the workforce. My mother was a secretary at a printing company and my father a manager at Telema Fishing Company – Liberia’s second largest fishing company. At the time my sister We’re the two kids who lived with them in Liberia. We were well provided for and if
there ever were hard times before the war…..my mother made sure my sister and I didn’t know about it. Mama was a mother who lived for her children. Very hands – On. She never missed our school programs although Mamawa and I didn’t attend the same school. Mama would pick up the child who did not have a program
first and rush off to the school of the other child and make sure that child knew she was in the crowd watching. I was always involved in plays or speeches at mine and She would run to get Mamawa after work and rush to my school. She was always there in time to give me that last minute cheer, kiss and hug to assure me she was watching and enjoying every second. Which for me, was all that mattered. I was a well catered for child as far as I know. Our father worked most of the time and we only really got to see him at weekends. My parents paid for everything we wanted.
3. What led to the RUF over running your part of the country?
A) The Revolutionary United Front (RUF) walked into Sierra Leone from Liberia via the border and started what they dubbed “First Battalion” in Pujehun District by capturing and recruiting young boys and girls into their rebel force. Soon after they took Kailahun District which was dubbed “Second Battalion” giving them access to diamond mines which were used as currency for ammunition. So those two southern districts became rebels stronghold.
4.At the end of your journey, did you meet up with Hassan ?
A) I could have met up with Hassan as I mentioned towards the end of the book when I bumped into How-are-you in the market. However, I was afraid he would find me and take me again. So no I didn’t.
5.Did you discover any further news about Base and Pustine?
A) I know nothing more about Base. I could find out about Pustine if I asked a few people but I have not tried to.

6.You had quite a violent eighteen months as a captive, has it anyway affected your perception of war, politics and your old country.
A) My experience has indeed affected me a great deal. First, before this I had no reason to think about war and I would forget really quickly soon after watching a war movie as a child. I remember owning a toy pistol myself once. However, after
experiencing two civil wars in a space of a decade, I think it is a pointless waste of lives, resources, infrastructure and a heinous offence to humanity. Why not just sit and talk about issue? Why not negotiate and bargain ( this is what would have to happen in the end anyway) and think about the citizens and the generations to
come? I think our leaders should picture themselves as parents when they are voted into power. They are voted out of trust and respect should always consider the people who give them power and use that power for the people rather than against them. Create opportunities in form of jobs, utilize national resources and subsidize the healthcare and education system of their respective countries.
Liberia and Sierra Leone need to stand up and value their people especially when there are so many emotionally destroyed individuals running around aimlessly. You cannot love your country if you have no respect for human rights. The aftermath of war, I think is almost as bad as the war itself. The country is left with traumatized individuals who are so confused and still scared: for those who participated in the massacre – they live with the guilt (if capable of remorse) over the lives they took, unable to fit in a functional society ( for people like Hassan, Base, CO. Gbembo) where instead of people answering to them they now have to learn
how to have bosses and a job, some live in fear of retribution.
For those of us who witnessed the horror we live with recurring nightmares and sorrow over our loss and we want answers but no one can offer them. For me carrying on is something that just happens because I am alive but still sometimes feel stuck. These memories can be triggered by the simplest event. I think about the day we left Monrovia almost everyday as I go past the dock and see cruise ships. Watching contemporary war movies or the sound of a car backfire gives me nightmares of the war.
Then all the dead bodies that are left in the forests where bombs have been thrown at people… get washed off into waterways and pollute the environment and lead to the spread of diseases.
7.In the book, there seemed to have been a breakdown of all forms of morality and ethics, what would be your understanding of this on the younger generation particularly the child soldiers
A) Living in war where there is no one to judge or guide one apart from God in Heaven (and that is if you grew up being taught of a higher power) shows you what humans are capable of given the opportunity.
Younger children, first of all in a normal situation must always be watched and led on the right path in life as we all come into this world knowing nothing more than our basic motor skills. Then a young child who is already confused by adolescence is taken from his or her family and forced to shed blood and is conditioned to think that these atrocities are the way of life can only lead to a generation of damaged men and women who will then go on to raise another angry and confused generation if care is not taken and something is done to rehabilitate and integrate those were involved into a functional society.
8.Hassan seemed to have been portrayed as a villain but as I read further I find you trusted him more and I wonder if you hoped he would get some type of counseling too.
A) I hope Hassan would receive counselling and rehabilitation. So many innocent youths were forced into those wars. Of course there were some who were just downright terrible human beings like those hard core criminals who were released from prisons in every town the rebels took over. Now that these men and women have been disarmed….what now? 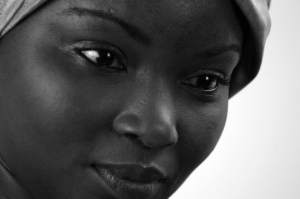 9.With the benefit of hindsight, what would you have done differently?

A) After asking myself this question so many times over the years I cannot think of much I could have done. Apart from pleading with my mother not to travel that day, that was the last time my sister Mamawa and I saw her alive.
10.Is your book going to be available in Liberia and Sierra Leone, and would it be effective in helping to heal and reconcile the victims of this war?
A) This is my prayer that this book does great things for my countries, continent and
the world. I hope I can get SURVIVED:The Journey into both Liberia and Sierra Leone and that it is perceived and accepted it as a healing tool, that my story encourages talk about theirs and that the government in these countries do something to properly integrate these former rebels into society and heal the countries, I hope it is perceived as a history lesson, as well as a possible guide to how matters could be handled for the sake of the innocent civilians.
11. Please let us know, in what ways this recollections has affected you and what advice you might give young persons who may have been affected by the book
A) Reliving my experience in order for me to write my book has helped me accept that sometimes in life things beyond our control happen to us and we can never get answers to the question we need answered in order for us to move on. And that
sometimes being alive and healthy is all you need to ask God to give you courage to summon the strength to see his grace in your life. My questions were: Why? Who gave these people the right to invade my life, disrupt my home, and tear me away from my mother? Who said it was ok to snatch my innocence away? What makes them so worthy? God where were you, Why were you so angry to let it happen?
To every young boy or girl who reads my book, be courageous, stand for your truth and be yourself. No bad situation lasts forever. Have a lot of compassion for yourself and your peers.
Every new day is a promise.

12.What group of people will you recommend to read your book?
I believe that this is a good read for people of ages 15 and up. There is a lesson in it for everyone. Our politicians too could learn a thing or two.
13.Please give us links to anyone interested in buying the book.
SURVIVED: The Journey can be purchased at http://www.survivedthejourney.com or amazon.com or http://amzn.com/0473246244
For comments and discussions after you have read please find me at amazon.com/author/survivedthejourney.com Also at https://www.goodreads.com/httpwwwsurvivedthejourneycom